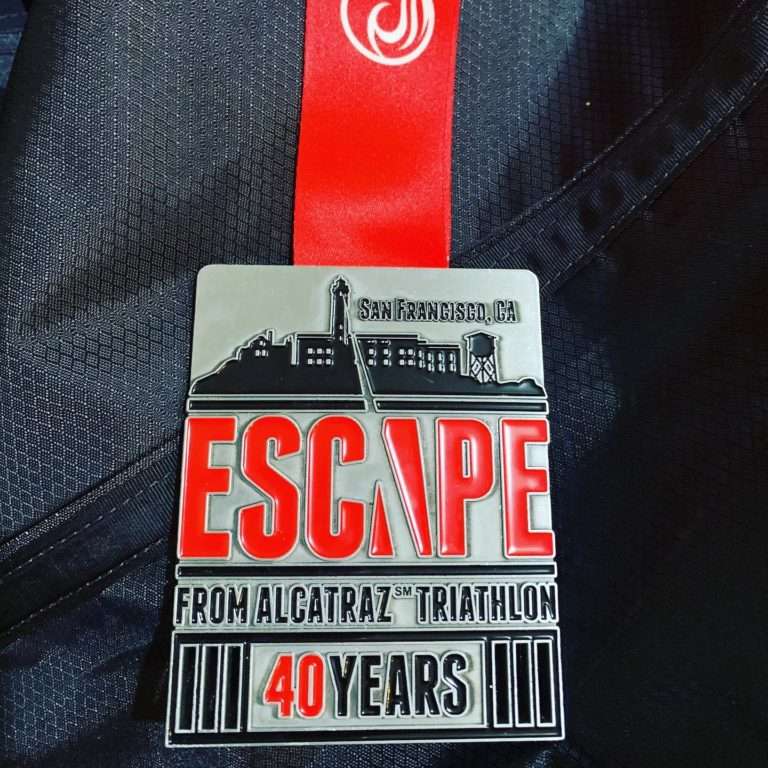 Triathlon Race Report for Escape from Alcatraz: August 15, 2021 was the 40th Anniversary of this iconic “bucket list” triathlon race. I feel grateful to have been able to participate and finish it! Here’s my race report.

The day started at 3:45 AM because the transition area opened at 4am and you want to have plenty of time to set up and board the boat by 6am.

I catch a shuttle bus from my hotel at the Fishermans wharf to the transition area. I decided to leave my bike in transition overnight (although you had the option to bring it on race morning) but that was the only thing we were allowed to leave in transition the night before. Having a headlamp at that time in the morning was very helpful because it’s almost pitch black, making it quite difficult to set up your bike and run gear in transition. After setting up transition, we had to get on another shuttle bus to go to Pier 3 where we would be boarding the boat. It was a good idea to get there early because it is nice to be able to lean on something rather than sitting or standing for an hour or two before the boat departs. I did a stretch and mobility routine on the boat and had plenty of space because I got there early. If you want to see my mobility routine, you can find that here: https://youtu.be/NlZwVBDT1lk . Once you hear the engine roar, there’s a big cheering round of applause because then we know the race is on and we will be jumping pretty soon. We watch the pros jump and start swimming and it’s quite remarkable to watch them. I found out later that a former client of ours who’s a professional triathlete now was actually in first place in the Swim so that was pretty neat! You can read about his experience with our practice here.

In the athlete mandatory meeting the day before, they said that all 2000 participants would be jumping off within eight minutes (jump time was 7:30am). However, I did not jump till 7:44 AM and the boat was drifting and repositioning based on the winds and the current. Well this year‘s swim conditions were a little bit tougher than previous years and resulted in a much longer swim, 2.2 miles instead of 1.5. The trajectory was also quite different than previous years. Instead of an L shape, it was more of a straight line,  see below pic from my StravaY 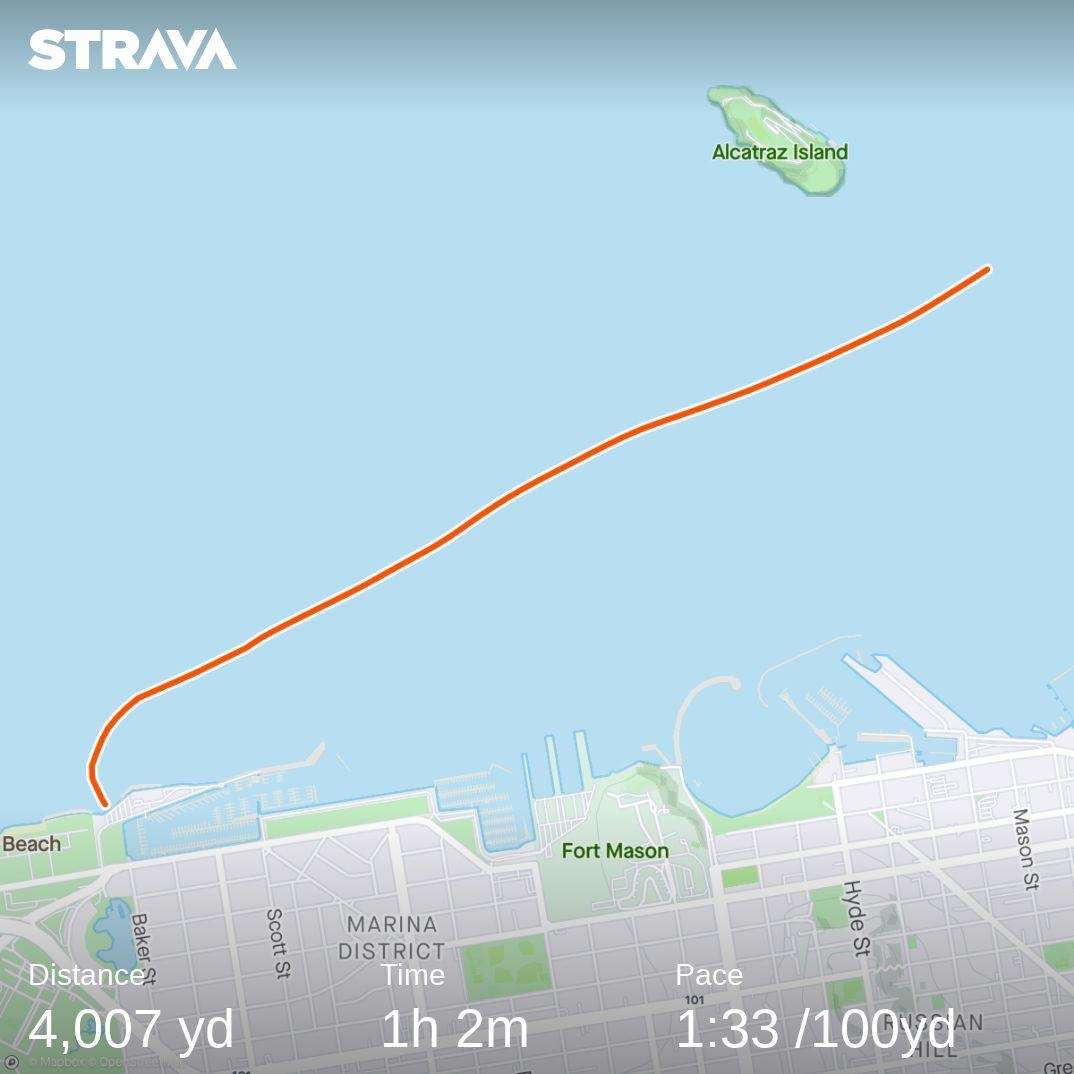 My Escape from Alcatraz Swim Route

I felt pretty good on the swim, despite the choppiness and the currents. I felt pretty well prepared. The swim clinics from Waterworld swim were integral for my preparation for this race. I did two jumps with them and I did a crossing from Alcatraz to aquatic park in the months leading up to the race. I wasn’t fast but considering I learned how to swim when I was 33 years old, I think I did fairly well! It’s a huge relief to see the beach and get out of the water. I was pleasantly surprised to see wet suit strippers which is just awesome if you’ve ever tried to get out of a wetsuit. That’s nearly as difficult as the swim itself!

There was a half mile run on pavement to transition. I did have a bag at Swim exit and quickly put some shoes on and was surprised at how quick I was able to run after the swim. I think I was  pumped from surviving the swim!

The bike course was hilly as expected since we are in San Francisco. I’m very comfortable biking up and down hills so this was a pleasant ride for me. I suppose many people I hate biking up hills and overheard a couple of Ironman athletes complaining that Ironman was easier than this race course lol

By the way, it’s helpful to keep an eye on the unique house or flag that is in alignment with where you put your bike in transition. When you’re running in from the swim, you can be kind of disoriented and forgetful. The last thing you wanna do is go up and down the aisles looking for your bike.

I had a pretty fast transition from the bike to the run. There were volunteers and 8 aide stations at every mile. The most challenging part of this run is the run along the sand and then the dilapidated sand ladder. It was less of a ladder and more of just walking up sand. I recommend running along the water where the sand is more packed. After the ladder, there’s a bit more climbing and then you get to go fast downhill with the return to Crissy field being flat.

The run to the finish line is just awesome because there are literally tons of people along the side cheering you on. It’s just an amazing feeling to cross that finish line. I understand why this is such a bucket list race for triathletes, it truly was an epic experience! I highly recommend this race and may just do it again next year!

If you’re a triathlete who is looking for help with an injury before your next race, feel free to reach out by going here: